It’s the summertime and of course that means I’m outside hiking and biking. Or so I claim - there’s no proof except for photographic evidence, right? And there’s no better evidence than a nice big panorama shot that captures the entire stunning vista before you.

The iPhone 4s was the first Apple device to include a Panorama feature, allowing you to take one very wide photo with a single click (and a lot of slow, steady panning - what photo and movie buffs call swivelling horizontally from a single fixed position.) There are a few tips and tricks to this, however.

Firstly, to get your phone into “Pano” mode, pull up the camera, either by tapping on the appropriate icon on your home screen, or swiping up from any app (or the lock screen) and tapping that same camera icon. Once you’re in camera mode, it’s as simple as swiping left twice to pull up the Pano feature.

You’ll notice that the photo window turns from a cropped image with a bunch of icons to one large image, and a message telling you to “turn your phone continuously.” Just tap the shutter button and start smoothly turning around to begin filling in the panorama. You can pan all the way until your phone prompts you to stop, or quit early at any time by pressing the shutter button again.

In order to better understand how to take a good iPhone pano, it helps to understand what’s going on here. Your phone’s camera lens isn’t wide enough to capture everything around you, and the camera also isn’t shooting one long video take of your slow pan. It’s actually taking a sequence of individual photos, and then stitching them together into one big image.

This is why you sometimes see people appearing multiple times in the same panorama - they are jumping into one of the early frames, then when the pan goes past them, they scurry around the photographer and jump in as the camera pans towards them. Each photo is taken in sequence, so the later ones can capture things happening later on than the first. This also means you want to try and avoid shooting panos if you or the subject are moving, as they’ll often look very strange - “clipping” or appearing cut-up between the stitched photos.

Panorama ScreenshotThis is also why it’s important to keep the phone level and straight as you pan, and avoid moving your phone up and down vertically. Next time you shoot a pano, try intentionally going up and down - you’ll see that some of the image comes out black. This is because the camera’s range is only so large, and if the phone tries to stitch everything together based on the horizon, it won’t have enough image to fill in the areas that don’t match up between shots, and your pano will be automatically cropped on the top and bottom. 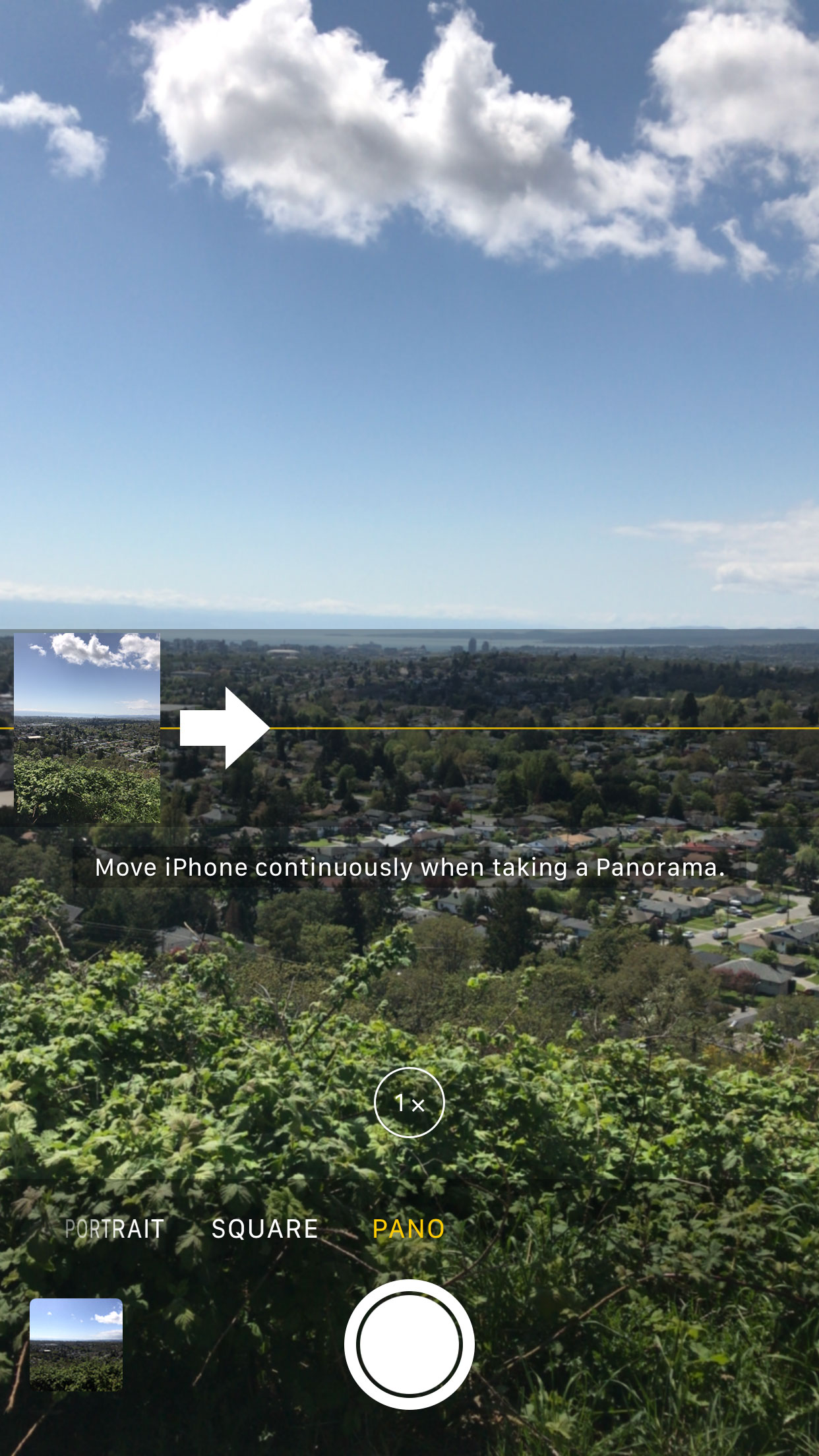 One other thing the pano mode struggles with is exposure, since it tries to keep the same settings throughout your pano. This means you want to try and keep the subject of your panorama in about the same amount of light or shadow. Trying to pan a sunny scene of a passing sailboat right into the dark and cozy cabin of your own boat will result in total darkness at the end, or complete whiteout done the other way.

Once you’ve taken your pano, you can treat it pretty much like any other iPhone photo - just be conscious of the fact that it’s likely quite a bit larger than most of your other shots. If you’re a Facebook fan, they released a new 360º photo option last year that allows people to move freely within your pano, so consider uploading it there - more info is available here: https://newsroom.fb.com/news/2016/06/introducing-360-photos-on-facebook/

Got a cool pano you want to show off? Send it to us! You might just see it in the next issue of the Mac Zen Newsletter.